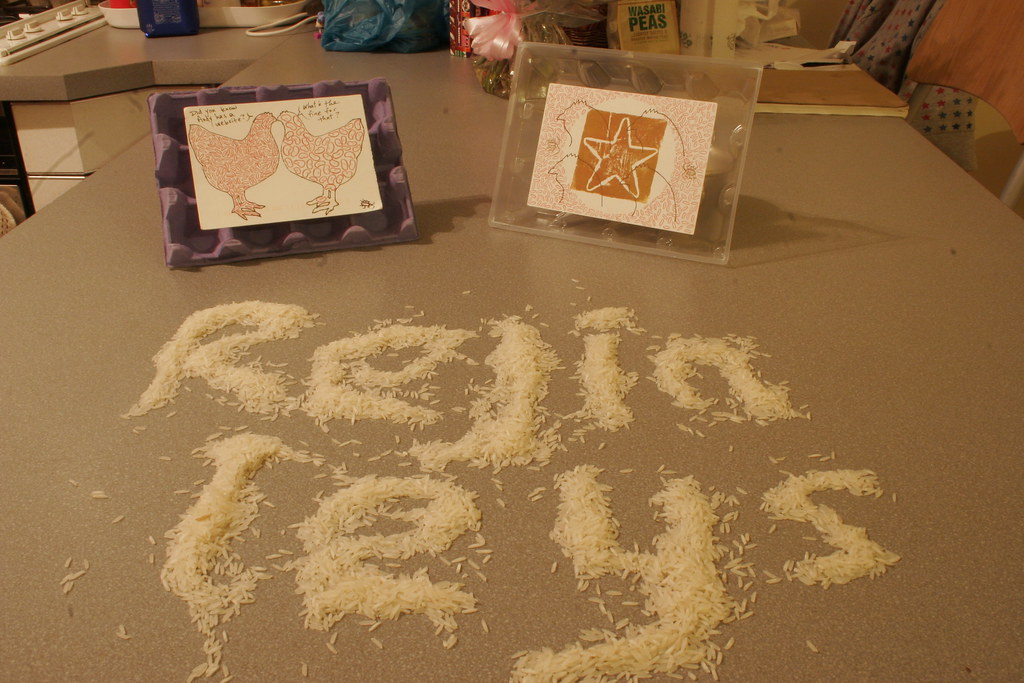 I became aware of the work of New York based mixed-media artist Rejin Leys through the July Twitter #mailart project.

Her present series, entitled "Evolution + Connections" was inspired by the food shortages that confronted the US last year and in them we see recurring motifs of chickens, rice, eggs, entrails, bugs and stars.

If you check out her sketchbook at rejinleys.com/, you’ll see that as the year has gone on, she’s really distilled her art to a very distinct style, and the resulting pieces are delightful. You would think that given a small number of symbols and colours that Rejin would be kinda limited in her ability to express herself, but the disciplined approach has really paid off.

Take for example the protest post, featuring 2 chickens. Up until now I had expected the pieces to be purely symbolic representations of shape and form, but when I received this and realised that they could talk I confess I was surprised! I guess that I hadn’t expected that the pieces could go beyond the limits that I had constructed for them and that’s the beauty of this whole series.

I wouldn’t say I’m any artist but looking at Rejin’s series I love the way that she uses symbols and motifs which become familiar over time, leading you to a sense of security and safety. Then suddenly wham! The chickens start talking or she throws a human torso in the mix. It’s kinda freaky.

Do keep an eye out for her on the art scene if you’re lucky enough to be in New York, cos it looks like she’s gonna be doing some talks near you!