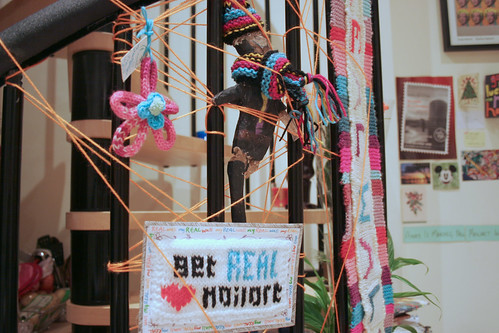 For me and Elena, knitting begins and ends with Okadascat and every parcel through from this mysterious northern knitter makes us both squeal with delight.

The REAL wall correspondence affair began not long after I began my REAL wall, when one day I received a small random square of wool in the post with some mailart calls. Being new to the whole mailart thing back then I wondered what the heck the mailart calls were, but was fascinated by the wool. Up until this point I had figured that the only things that could be sent through the post were made of paper. Fabric in the post? Weird, but strangely compelling.

So I tracked down the artist and had a poke about on www.okadascat.blogspot.com/, where I found loads of examples of yarn-bombing and street furniture cosy knitting. Somewhere up north Okadascat was getting up to yarn-based mischief, keeping bollards warm with custom made wooly cosys. This was my kind of fun, so I cheekily sent her an email asking if she could make my REAL wall a new banner.

Much to my surprise, a full size knitted banner appeared in the post at the end of that week and it’s been all over the place with me since.

Thinking that things couldn’t get any better than that showed yet another bit of underestimation on my part and when the whole council fiasco got under way, one of the outstanding pieces that came through was the wooly protest mail from Okadascat, which was knitted onto a card.

The wooly star which arrived in late 2009 spurred Elena to pick up some knitting needles and we spent New Years Eve indoors knitting and making mailart, which is really testament to how much of an influence this wooly stuff has had on us.

The latest piece, a complete surprise too, was mini-Andys new hat and scarf, which will come in extremely useful when he takes to the road in March. We couldn’t believe our eyes when this one came through.

So, even though other knitters do exist out there, Okadascat has opened our eyes to a whole new angle on knitting. Before her, knitting was really just functional and not all that glamorous, but now we all know that knitting is actually the new cool.

All hail the one and only Okadascat!

One thought on “my REAL wall features Okadascat”