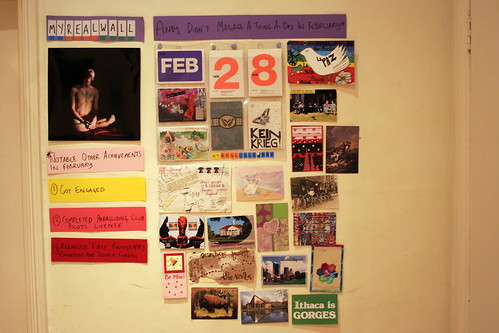 At the start of this month, I was invited by Sunnysidey to join the Unofficial Thing-a-day 2010.

Never one to turn down a challenge, I accepted and set about resurrecting everybody’s favourite miniature-Hero. Then, just for a laugh, I thought I would also enter the official Thing-day, and make a REAL wall every day for February.

What I had failed to take into account was the fact that I have a full-time job, hobbies and other commitments too, so after less than a month, I have to hold my hands up and confess, I had to let some of these slip. Well alright both of them.

mini-Andy lies still injured upstairs in the mezzanine floor with Tweet-twoo wondering when the next photoshoot is going to take place, and the backlog of postcards has been building up.

So here is my end of the month REAL wall for February, and my sincerest apologies to anyone who was expecting prolific creative output this month, coupled with my excuse list on the side.

It’s not a bad list of excuses though right…?