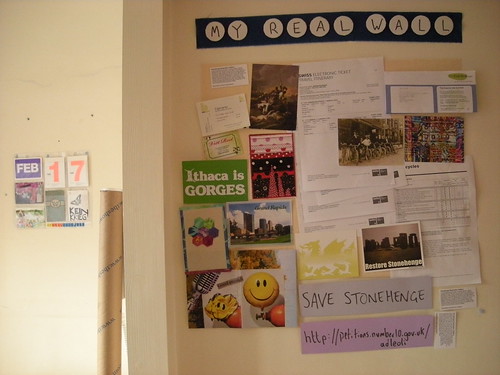 Those of you that have been following the return of mini-Andy on Unofficial TAD 2010 will have been shocked to read about the unfair treatment of the Saharawi people of the Western Sahara, and I noted from the feedback that many people didn’t even know that such a situation existed out there.

I’ve had the idea for a while that my REAL wall could serve an educational purpose for issues like these, and urge anyone to send in post that can perhaps educate readers of my REAL wall in the big issues of politics or social injustice. I would love that my REAl wall became a place that was informative and educational as well as entertaining.

Generally speaking I’m not very political at all, so I’d rather not have really horrible stuff on here but I hope that by using my REAL wall as an alternative, lightly entertaining soapbox, that people may be persuaded to read about and engage with some of the issues sent in. They can be local or global issues, but by sending them here we can all hear about them, in amongst our daily dose of mailart, postcards, knitting and letters.

Ideally, I’d like you to send in issues on postcards or in mailart that are close to your heart, in which pens and papers can make a difference. We saw recently with the council fiasco that mass mobilisation of pens and paper still has the power to bring about change, so why not let’s try!

[May I put in a disclaimer at this point – not all views expressed in these campaigns are mine. I’ll try and feature all the campaigns that are not downright nasty, even if I don’t agree with them. The REAL wall does agree with freedom of speech, but not with any bad vibes type stuff]

Today’s issue comes in from an anonymous source in Wales and is a call for people to sign the Stonehenge restoration petition. One of the beautiful things about the UK is that we have the right to petition the government by collecting signatures if an issue vexes us, and we can then deliver this protest straight to the Prime Minister in number 10, Downing Street. If a petition has enough signatures he might even take notice of it and do something about it.

The card says the following…

In recent years there has been a renewed calling for cultural artefacts that were removed from one nation to be restored to their place of origin. Greece having become a thriving democracy has secured a UN resolution for the return of the Elgin marbles. Like Greece, Wales has developed into a thriving democracy and believe that time is now right for Wales to reclaim her cultural artefacts. We believe that the stones currently making up the structure known as Stonehenge were taken from Wales unfairly and that the British government should give consideration to the case for having the stones returned to Wales.

Having been to Stonehenge once in my life I can say that I personally won’t miss them if they go back, so why not help out with the campaign, sign the petition online and let the Welsh have their rocks back.

2 thoughts on “my REAL wall says Restore Stonehenge to Wales!”