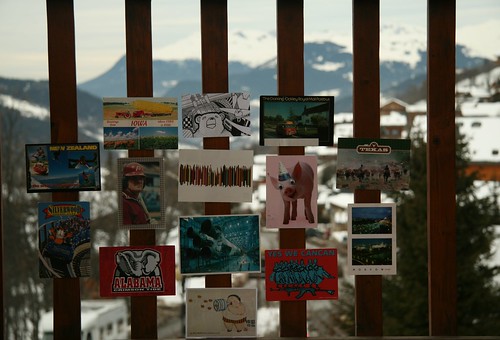 The mountains from Meribel, France, originally uploaded by andytgeezer.

A very happy “thank the stars it’s not January” to the REAL wall, where I return as today’s poster [but not poster girl].

There are very few joys during January in my experience (bar Andy’s birthday and a couple of other minor happenings). Hence, we decided it was time to break the bleak routine by skipping town to go skiing in France on the [possibly] world famous disco train which takes you out of London at 9pm on a Friday, and drops you at the foot of the slopes at 5:40am on Saturday.

You may be surprised to hear that around 1am, as soon as the bar carriage stops serving overpriced booze, the atmosphere changes instantly from fun and carefree to sleepy, grumpy and somewhat hostile as fellow passengers insist on crashing out. Disgrace. What has this world come to.

You’re seeing the view from our apartment and a range of postcards, whose brief subject summaries I thought could be linked somehow to provide us with a little tale:

The fat man drives a rocket postbus between Moscow and Texas with a rifle and his collection of pencils. His pig asks him whether he’d prefer to take a rollercoaster to New Zealand, to which the fat man tenses his brow like a baseball player, and eventually replies he’d rather be squashed by an elephant as if he were a cob of corn.

And there we have it. Fat man gets a mention twice obviously, but please don’t take offence.

Good to be back,
Lplatebigcheese

2 thoughts on “The mountains from Meribel, France”