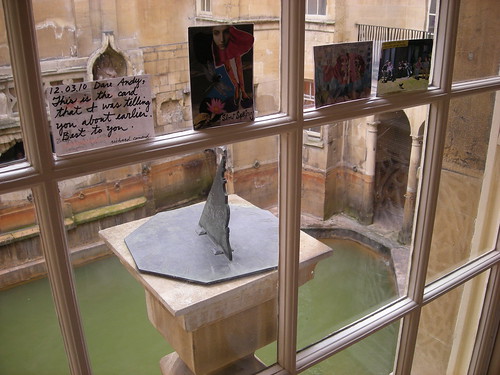 Finally, after what seems like a year without a break (ok it was about 2 months) me and Elena finally got some "Us time" and decided to hire a car for the first time ever!

I only passed my driving test 6 months ago, and haven’t driven since then, so we really should have taken it easy, but we decided to head out of London to the West Country, trying to get deep into Devon and Cornwall.

As we only had 4 days and a hire car, we couldn’t push too far, but our first stop was Bath, a beautiful little city in Somerset.

The most famous thing about Bath is the Roman baths, after which the city takes it’s name. Legend has it that these were founded by Prince Bladud, son of King Lear, the dude that Shakespeare wrote about. He came back from Greece with leprosy and, after seeing some pigs bathing in hot mud and realising that they had no skin conditions, he decided to bath in the stuff himself and was cured of leprosy. He then went on to set up the city of Bath and had the baths of Aquae Sulis at the centre of it all.

For me as a paraglider, the legend of Bladud has a more interesting side. Apparently a fan of necromancy, Bladud also constructed a pair of wings for himself and tried to fly from London to Greece.

He didn’t get that far, as he hit a REAL wall and fell and broke his neck.

So, in tribute to Bladud, whose likeness you can see, just behind Richard Canard’s postcard, here’s today’s REAL wall over the historic Roman baths at Bath.