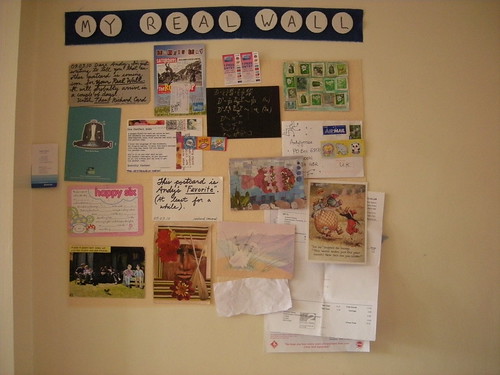 One of the most awesome constant contributors features prominently on the wall today. Okadascat has put together an awesome "Hello to the fish" artwork, which is a very delicate piece and is going up to replace Heleens landscape on the aquarium later today. Me and Elena were bouncing up and down when we received this.

My new favourite though, comes from the mysterious Richard Canard. I don’t think I’ve got around to sending him anything yet either, but he has 2 new pieces up on my REAL wall today, one being my favourite and another card announcing that another card is on it’s way. I’ve never really understood that idea of announcing that another letter is on the way, but it does always make me smile. Anyone know where I can find the rest of Richard Canard’s work? I only ever find him on other people’s mailart collections.

The final one worth a mention today, really does make me feel undeserving, and comes from someone called K Ross, from Yorkshire.

The reason that I feel undeserving, is because I am actually undeserving of this card.

Here’s a little background about how my PO Box works. At the start of the year I paid a fee for the PO Box, which meant that the Post Office would set aside a little box for me with my name on it. For twice the price they would deliver it to my house every day.

Now I had assumed that the Post Office would have some awesome system by which the redirect would take place, but in actual fact what happens is that when your mail arrives in my PO Box, some little guy in the Post Office, crosses out the address and writes my REAL address on it by hand in pen! This is why some addresses on cards are blurred out or have convenient stickers over them, despite having a PO Box!

As for the card from K Ross, this was a competition entry addressed to PO Box 54209, and the Post Office, seeing that it was a cool looking card, crossed out "PO Box 54209" and put my REAL address on it!

In case you’re interested the answer is "1910", although I have no idea what the question is. Why not send them a postcard and see if you win…