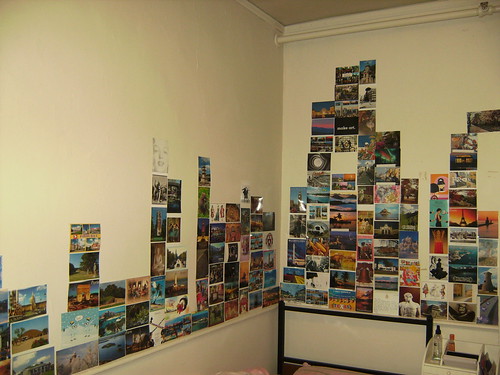 I found out about Clara Yoon’s Postcard Skyline project a while ago after posting up a thread on the postcrossing forum about postcard displays.

Clara has been collecting postcards for a while and sticking them on her bedrrom wall, initially to make a tower, then decided to go for a whole skyline!

I recently sent her a postcard to add to her wall and got an email back today thanking me for it.

Here’s what she says

"Your postcard was lovely and is now proudly nestled amongst the other postcard bricks of my postcard towers!

I’m not going for any particular skyline – just a skyline in general! But I now have over 150 postcards and it’s shaping up really well!

I’ve attached a picture of it as it looks currently and I would be so proud to be up on myrealwall!!!

Thanks again so much for the postcard!! I really appreciate it!!!

Mine is the Maharaja postcard, fourth down, third column from the left in the central tower.

By the looks of things she’s going to run out of space on that wall pretty soon. Why not visit her site and give her a hand today!