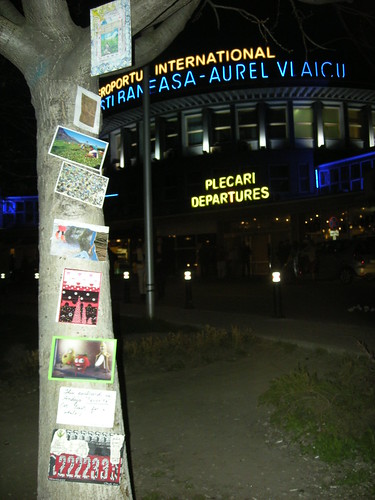 my REAL wall at Baneasa Bucharest, originally uploaded by andytgeezer.

I’ve been back in London for a few days now, but here is the last pic of postcards that me and Elena took in Bucharest after walking from the centre of the city to the airport.

If there’s one thing that Romania is really well known for, it’s the chaos of bureacracy. In the main, Romanians are lovely people and very welcoming hosts once you get to know them. However, when it comes to public services, they really do suck and it seems all common sense goes out the window as soon as a Romanian puts on a uniform.

Ask any Romanian living abroad about fines and they’ll tell you that every trip you take on public transport is a minefield of avoiding pointless fines, and that no matter what you do, you will get fined on a trip.

Last time we came to Romania, me and Elena flew into Cluj-Napoca. When we got off at the airport, we had to get a bus into town. However, when you get a bus, you need to firstly buy the ticket from a booth outside, which are not necessarily at the bus stop. And for that matter they are not usually open.

That day, the booth wasn’t open for some reason, so we got on the bus and tried to explain when the inspectors got on that the booth was closed and hence we couldn’t buy a ticket. Obviously they didn’t listen and fined us 10x the cost of a ticket. A very typical occurence.

This time, given that it was Easter when we returned, not a single booth was open in Bucharest but the buses were still running. As we had 2 hours to spare, we decided to take our chances and walked all the way there, which took us about 90 minutes. It just seemed a much better idea than paying money to morons.

7 thoughts on “my REAL wall at Baneasa Bucharest”