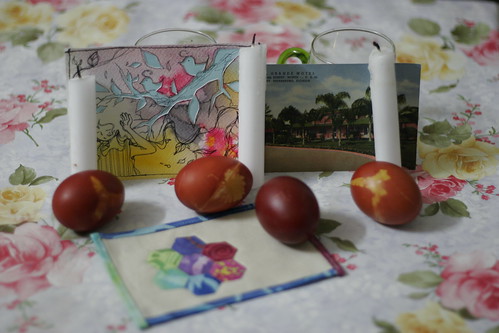 my REAL wall does Easter in Romania – Part 1, originally uploaded by andytgeezer.

This Easter me and Elena went to visit her folks in Romania and I experienced my second Romanian Easter, this time with the company of your postcards.

Romania is still a very traditional and deeply religious society, hence Easter here is still a big deal, and is laced with religious significance unlike our chocolate and fluffy bunny affairs in the UK.

Along with postcards from Sunnysidey, Cross Ryu and Carlene, you can see some eggs (Oua) which are boiled in red dye (Vopsest), signifying the blood of Christ. 3 of the eggs have patterns on them, as they were boiled with flower petals on them to leave a pretty imprint, while the 4th egg, which I initially wanted to leave out of the pic, is just as important, as it represents the deep red of the bloodstains of Jesus as he suffered for humanity and all that.

Traditionally, the family gather around the table with the eggs and have a game. One person holds an egg, while the other hits their egg on top with another egg. The one whose egg remains intact wins and you go around the table until you have a final winner. Last year I lost every round of this game until I found out a little secret, but I won’t tell you it, as Romanians LOVE having foreigners around to play this game…