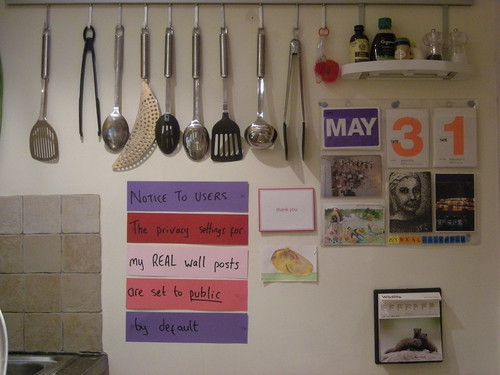 my REAL May Bank Holiday project, originally uploaded by andytgeezer.

It’s a Bank Holiday here in the UK, and with three days off you would think that me and Elena would be off on adventures with your postcards or I would be paragliding the skies above the South Downs.

But this is England, where Bank Holiday weekends can only mean one thing.

So with paragliding rained off and our trip to Kew gardens butterfly exhibition called off we decided to do what most newly settled couples do and get some DIY done around the house.

Initially reluctant, I finally got into the swing of things and by lunchtime we had already managed to put up our first thing in the house!

The hanging kitchen utensil rail has been propped up against the wall since we bought it about 4 months ago, waiting for the moment when the two of us would have the time to drill some holes into the wall.

Today we finally done it and after 5 other major drill jobs in the house we moved the REAL calendar into the kitchen and had a well deserved cup of tea.