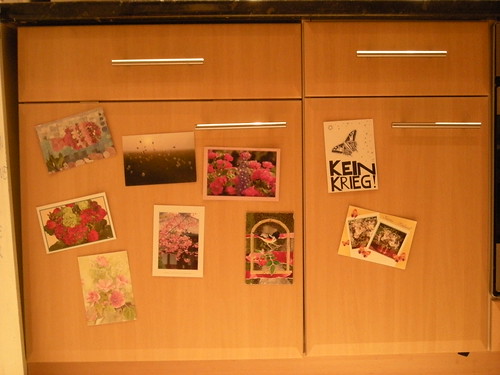 Now finally settled into our new home, me and Elena spent Bank Holiday Monday doing odd jobs and DIY around the house. One of the DIY jobs we had to do this weekend was to change the way that the door on the fridge opens.

When we moved in, the door was fixed to open on the left (hinges on the right) which was really inconvenient because this meant that you were squeezed in between the wall.

Changing the door around was riddled with all sorts of little puzzles and the final one was to move the handle from the left to the right of the door, for which we had to drill some holes.

This left us with two pretty glaring holes, which I suggested we fill with polyfila.

"Chuh!" exclaimed Elena "Let’s just stick a postcard on it"

So we got the fish out that was sent to us by Okadascat and stuck that over the holes. Elena was still not happy with how lonely the card looked on it’s own and insisted that we put more cards up, so here they are!

4 thoughts on “my REAL wall does DIY fridge change”