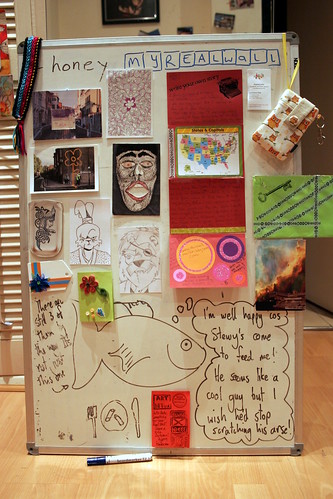 my REAL wall – Reasons to be cheerful, originally uploaded by andytgeezer.

My REAL wall today contains a whole lot of things that have brought a smile to my face this week and I want to walk you through some of them in detail.

Last week I ran my first mailart lecture at the university that I work at, and as a result I’ve received a lot of supportive mailart and post. All of the pieces I received mention the lecture and it’s been such a pleasure to know that mailart has touched so many people.

Feltypants, who sent me the postcard in the top right was one of the mailartists that was with me in the very first Twitter #mailart swap, and we have become regular correspondents, both by mailart and on twitter. Earlier this month, Feltypants said to me "Mailart absolutely gave me the confidence to pursue my art & painting. It was a great way to test out showing my work to others & I got great feedback, wouldn’t be arting now without that" How’s that for praise of the art!

Another contributor to the #mailart project was @museumnerd, whose cut out mask can be seen in the centre. This is on display again, because I aent it by Royalmail a few months to a friend, who was meant to take it to Dubai to do some REAL walls. However, it got lost in the post, and 2 months later, via a message on Twitter to @Royalmail, I got it back today!

In the top right hand corner is my new mobile phone case, which was handmade by S.P. Grimm, who goes under the name KapomCrafts on Etsy. I only started getting into Etsy this week and made my first purchase from Pal Grimm this week, who customised an iPhone case for my Motorola Milestone/Droid and sent it out so quickly. Elena loves my case and has now confiscated it until her own Etsy case comes through. Meh.

B, The Snail Mailer and my newest regular writer has written again to put me straight on a few issues. Last time I received a postcard from B, who lives in Bethlehem, PA, I had assumed that PA stood for Pasadena. Apparently it stands for Pennsylvania. Yes yes I know I’m a dumb Brit, but honestly we don’t hear much about Pennsylvania where I live. I’ve now found out that Pasadena is actually in California, so I consider myself now educated. B has also included a handy map, which I shall revise thoroughly next time I make any comments on American states.

The quilled pieces are made by Elena, who is learning to quill at the moment. She’s getting better and better, and is putting all her creations up on her flickr site. Drop by and give her some encouragement!

The other postcards were donated to me by Stevie at work. At she heard I collect postcards, she decided that she should give me all the postcards she had, and I thought that that deserved a spot on the wall.

The fish in the background was drawn by my best mate Stew, who looked after our fish when we went on holiday a few months ago. When I came back, he had drawn a fish on our whiteboard that made us both smile, and I’ve never had the heart to erase it.

With all the great stuff I’ve got from distant and close friends, it’s hard not to feel loved. That’s why this wall makes me particularly happy.

And with all this support, I felt like it was time to do something amazing myself. Last week during my mailart lecture I said I had always been uncomfortable with drawing. However, my students were so encouraging about my artistic abilities, that I left feeling an urge to overcome my fear of drawing.

Inspired by Stan Sakai’s wonderful comic "Usagi Yojimbo" I decided to go home and put pencil to postcard and made my first ever REAL drawing, which was of Usagi himself!

So fired up was I after that, that I went on to draw Katsuichi from Usagi Yojimbo too. I’m really proud of them and I’m even more proud that my students have made an artist out of me.

The support that mailartists give each other is great, and I hope that through my REAL wall and my lectures and shows that more people can discover their inner artist.

2 thoughts on “Reasons to be cheerful”