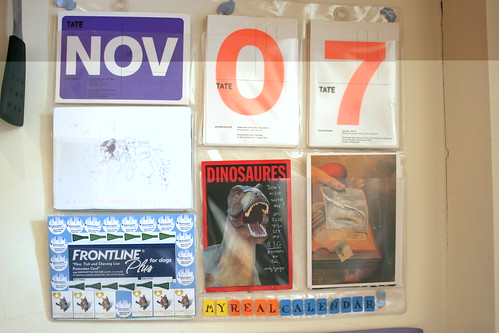 All the cards on todays wall are from REAL wall regulars, 3 of whom have only caught my attention in the last 3 or 4 months.

Mim, whose card on the right hand side, is a mailart and post fanatic from Richmond, who gave me some great ideas when I was putting my mailart lectures together. She’s been lecturing on the subject of mailart for a while and is someone really good to know if you are thinking of talking about mailart.

The remaining mailartists, Dewi and B on the left hand side and Valentine Mark Herman in the middle, came to my attention in the last few months.

Dewi was highly praised in the first mailart lecture by the students who were very impressed by his consistent and subtle artwork, which I admit passed me by the first time. On having this artwork pointed out to me, I took a closer look and realised it was actually damn good. Too subtle for me the first time!

B writes words, so I usually bring her stuff with me on the bus to work. This time the front of the postcard is a collage of veterinary stickers that were destined for the dumpster. I personally rather liked the effect, although B thought it could have been better. Enclosed in the envelope were also a bunch of photos, that I will be sending off to people for pimping soon and will put them up when they come back. If you want them send me an email or comment and I’ll send them to you for pimping!

Valentine Mark Hermann is one of the most active mailartists on the scene at the moment and always makes me laugh. This time his work shows a scary tyrannosaurus who has an even scarier big brother. Yikes!