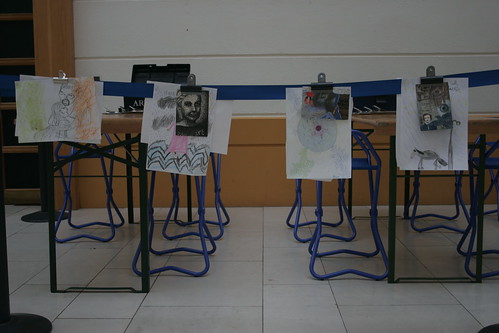 It’s been a while since the last time that your postcards got me in trouble, but this one got me a telling off from a security guard.

Me and Elena have just spent the week in Dublin, Southern Irelands capital, where we’ve just been recharging our batteries and taking your postcards for a walk.

In the corridor of the gallery, they had set up a few tables and chairs with crayons and A4 paper. Being on an artistic bender at the moment, I decided I had to draw, and knocked out that pic on the left.

Deciding to leave it there, I pinned it to the display and thought it would look a whole lot better with a load of your postcards, but couldn’t bring myself to remove all the great stuff by the kids, hence why your postcards are barely visible!

Anyway, the telling off came when I got my camera out to photograph the scene. Just as I took the shot, a security guard came over and said, "No photography allowed in the building" and looked at me sternly.

Anyone would think I was trying to take a picture of the Caravaggio that they have on display and not crayon drawings by under-10s!

Anyway, I left feeling very pleased with myself after having created this piece, until Elena said "Maybe you should have signed that ‘By Andy, aged 30’ to give it a little perspective against the other pieces there"

She knows how to put me in my place!