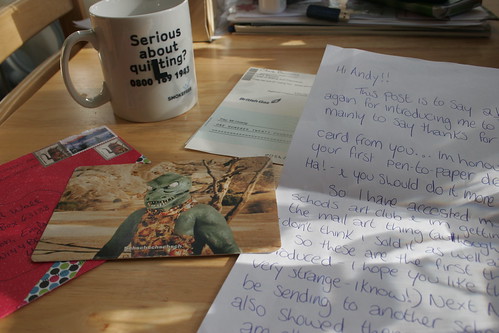 my REAL wall has always been about connecting to people and since it began I’ve loved not just seeing what comes through the postbox but also what people bring me. It’s been great seeing how creative my friends are, and this one made me laugh.

Me and Elena were out with L-plate Big Cheese, who put together the phenomenally successful “Tetris Tetris Everywhere” gallery on flickr. I’ve known L-plate since we met in Romania in 2004 and she’s a huge fan of my REAL wall. Having read that Elena was learning quiLLing on my twitter feed, she decided to make Elena a little present, adapted from a quit smoking campaign mug.

However, as quiLLing is not a particularly well-known art, L-plate had assumed that Elena was into quiLTing and put one of her custom L-plates on the mug, so that it now reads “Serious about quiLTing?”. D’oh. Quitting. Quilting. Quilling. Chuh!

Keep your eyes on your postboxes for some of Elena’s quilling, as she is on a roll at the moment. And not a quilt or a cigarette in sight.

Also on the table today are a postcrossing from the US and a letter of thanks from Katie R, who has started to get her pupils into mailart at school.

In the background is a cheque from British Gas, which nearly ends the British Gas Saga. After more than 2 months they finally put back our gas meter and sent us a bouquet of flowers and possibly a pair of tickets to a west end show by means of apology, as well as this cheque, which compensates some of the costs that we had to waste. I’ll keep the grumbles aside though, as we now have gas and some compensation, so we can say that this saga is closed at last.