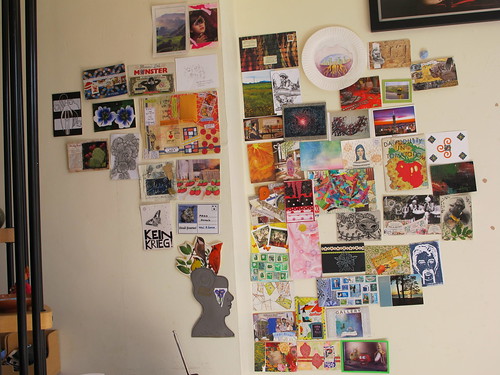 This wall is the one just over our bed. The stuff on here usually comes off the main wall, but are pieces that we both don’t want to put away yet. A living archive of mailart! 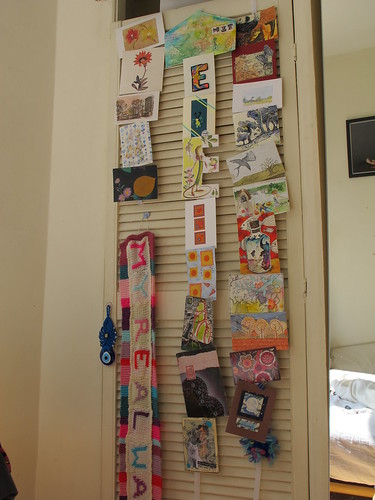 The ever changing and expanding Elenas favourites wall for May 2011, still populated by lots of Postmuse, Ubon and Dumpsterdiver, but now includes some quilling from Box652 and some cool JJalltheway. Notably, Elena has recently become a HUGE fan of Dewi Johan, who has been experimenting with more landscapes and drawing styles. Elena is not really a portrait fan, so much of Dewis work has passed her by, but the landscapes are really up her street. 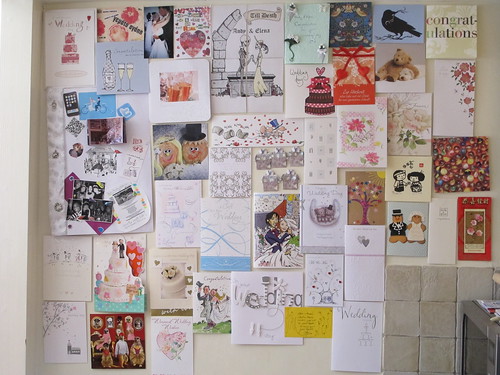 It’s taken us a while, what with all the catching up on received mailart, but we finally got around to putting up a REAL wall commemorating the years BIGGEST wedding…OURS!

Thanks to all for your cards, bought, handmade or whatever, it was humbling to receive so many wishes of good luck and presents. There’s nowhere near enough space on the server to thank you all, so me and Elena are going to work from this wall and send out as many personal mailart thank yous as possible. 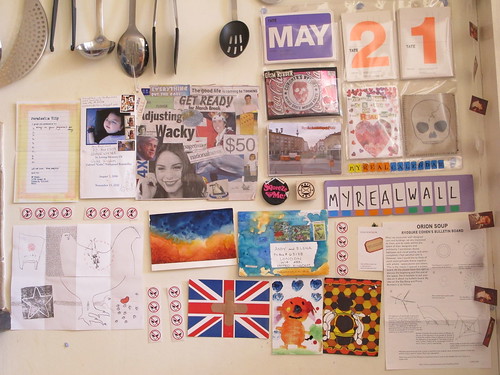 Not a hugely busy mail week this week, but I’m still catching up on the mail from before we went on honeymoon. Robert Graham, who teaches in Canada sent the large collaged piece and I’ll be sending something back to him shortly about a swap i’ll be arranging on my sister site schoolswaps

Also on the wall this time are Dumpsterdiversanonymous one of our favourite mailartists, who has written the most lovely letter, Superhero’s squeezy puck, Mims rubber stamp (sent in December) and L-plate, who includes the plasters right off her blisters! Sweet!

In the bottom right you can see the third in the series of the The Swarm, by Cornpone. While in Vietnam, I got stung by a bee, who landed on my neck. He stung me on the neck and the hand, so I’m not a huge fan, but I am a huge fan of Cornpone! 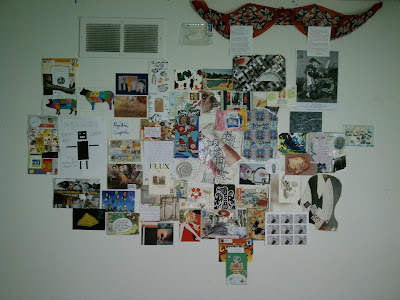 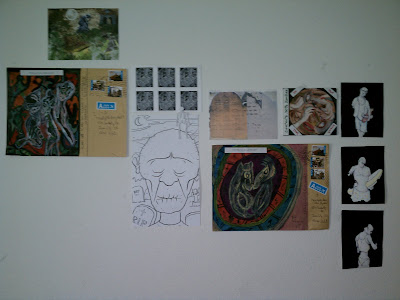 Here are the first REAL wall submissions from another Mailart365 member, the awesomely named i'm a superhero i can like fly and shit.

The first is the regular mail received. I can spot one from Shitbot! I'm so happy about that because I have one from the same mysterious sender, complete with alien skulls! It seems shitbot is sending stickers and mailart out to a few people on the mailart scene, but who is the Shitbot I wonder. Answers on a postcard please…

I love "Messy is good" too – who was that from superhero?

The second photo shows some of the submissions for i'm a superhero i can like fly and shit's new mailart call Mail of the living dead zombie mail art call. The call only opened recently, so hurry up and send your zombies, or as Superhero puts it – “There’s lots of whitespace still!! SEND MORE MAIL!” 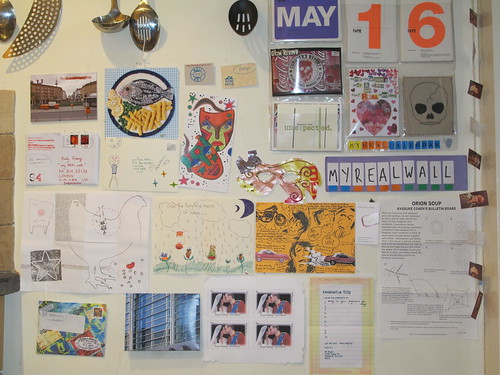 Look at all that lovely mailart! This evening, when I got home, I walked through the door with one of my neighbours. Being London, I’ve never spoken to him or even seen his face (not that I can remember), so to make small talk he said “Any good post?”

Of course I had good post! Today we got a lovely piece from Dewi (it will be up on the next wall) and he said “Oh you’re the guy who gets all the awesome post”

Yeah I do get a little kick out of it!

On the wall today are 2 pieces from a mystery Canadian sender, who has been sending cool, really childlike post for a few months. There’s no return address or message, so I can only wonder. Any takers? There’s also a little birthday card from Francis and Nisha, who put together the Little Big Stories at Pimlico library and a belated Little Big Story from Louise Kiner, which got sent back to her and finally arrived 2 weeks after the show ended! Never mind Louise, when I get a chance I’ll be putting together a book to raise funds for the library.

Check out that beauty from Ryosuke Cohen, and the Chicken from @RejinL and the Royal Wedding stamp set from Laura Podob.

I’m the one who gets all the awesome post you say? You bet your ass I am! 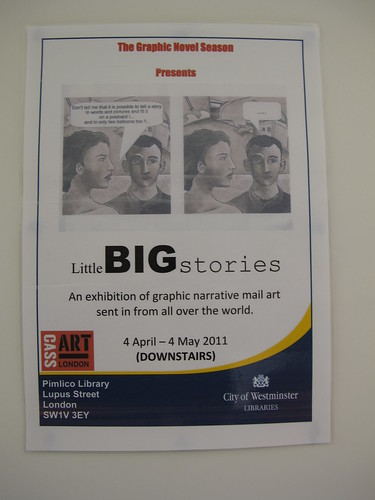 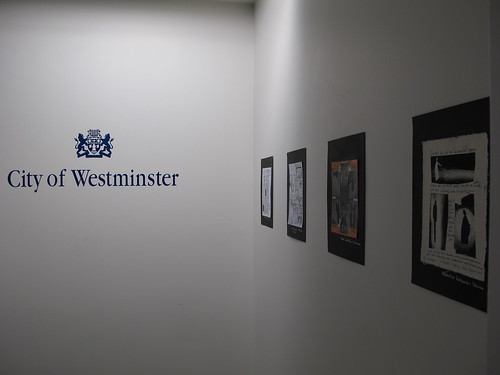 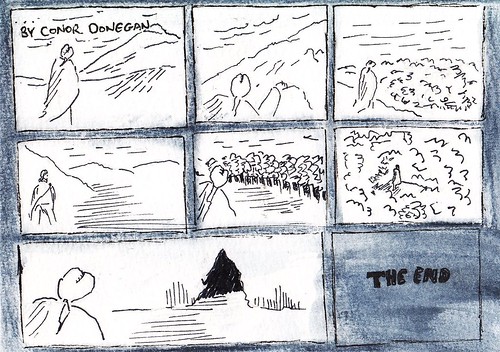 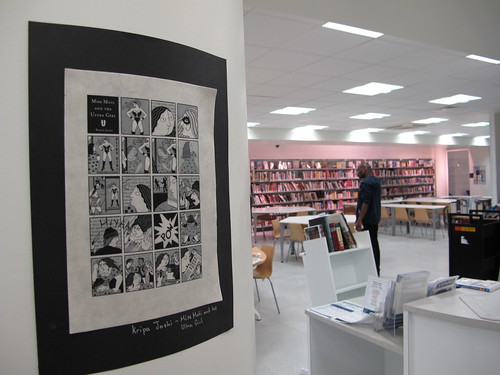 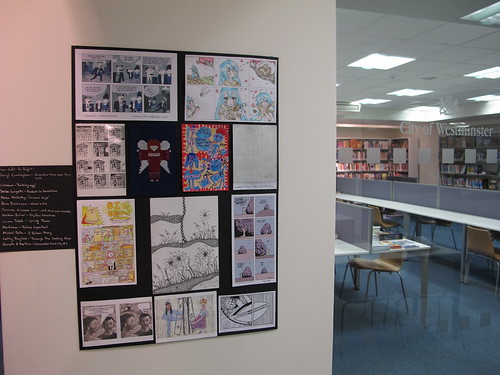 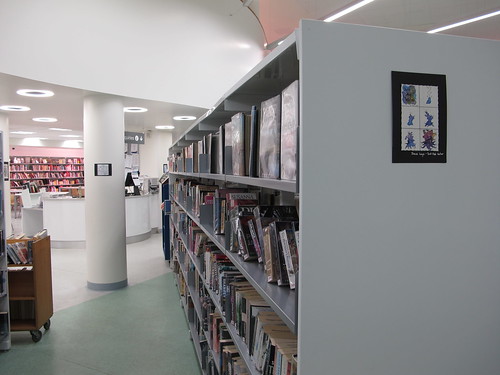 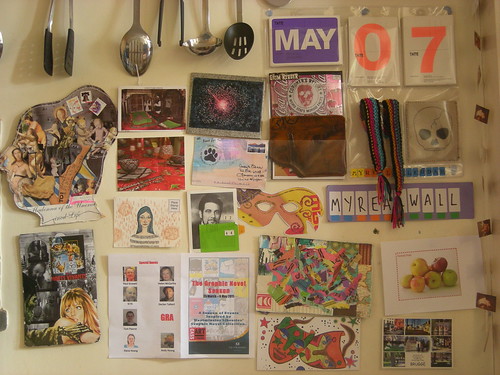 Finally after months of waiting, we seem to have come out of winter and the spring is here in London. mini-Andy has left his scarf on the REAL wall and is back from Vietnam, where he’s been honeymooning with maxi-Andy and Elena.

There’s some great stuff on the wall today, including wedding good tidings from Prettylily, and some older pieces sent by Camel and friends. No 51/365 by Robayre is up on the wall next to 78/365 by Lindsay Stewart and above that is a landmark #100 from Okami

JJ’s QUASAR is the other 365 on the wall today and the zombie mailart comes from I’m a Superhero and I can like fly and shit (I always love saying that) as part of his latest call – Mail of the Living Dead – Send that man some zombies!

The non-mailart pieces come hand delivered from Brugge by Elena’s best friend and from Jose Day in Holland who found my REAL wall via flickr as well as one from Varanasi in India where Shazhan Lin, from China is currently on holiday.

Thanks to all of you for making my REAL wall look so cool! 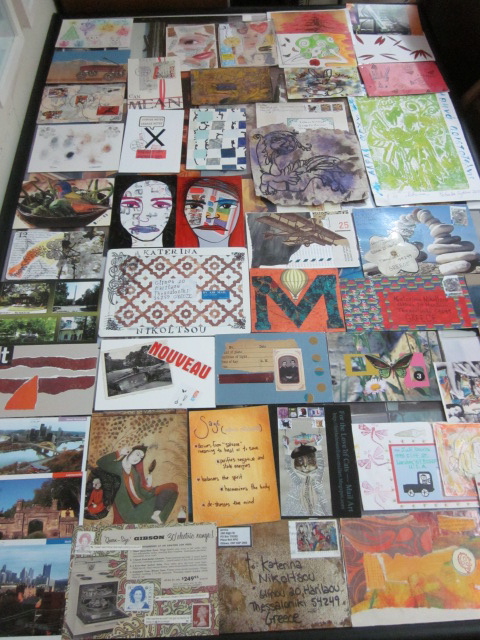 Katerina Nikolstou is one of themost prolific mailartists on the scene at the moment, and one of the many mailartists on Mailart 365 who are on track, with over 150 posts since December 1st, 2010. Here’s her first REAL wall, including 2 pieces by me and loads of received pieces from Mailart 365ers. What a stunning wall this is! 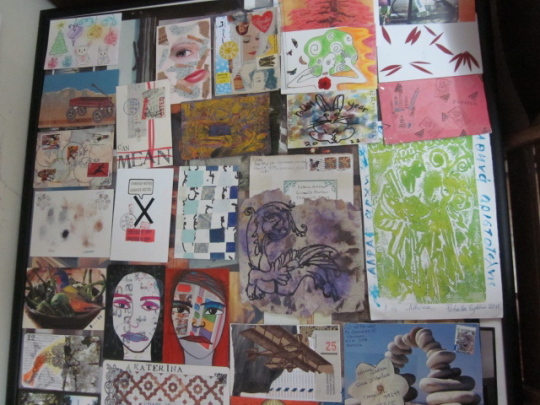 Katerina has been a real inspiration for many people, and last year she ran a great mailart show in her home city of Thessaloniki which I contributed to. It’s nice to see more of my work up on walls in Greece, and if you have sent mailart out that way too, perhaps you too are on her wall today.

If you see your piece on the wall, leave a comment below and tell us which one it is! 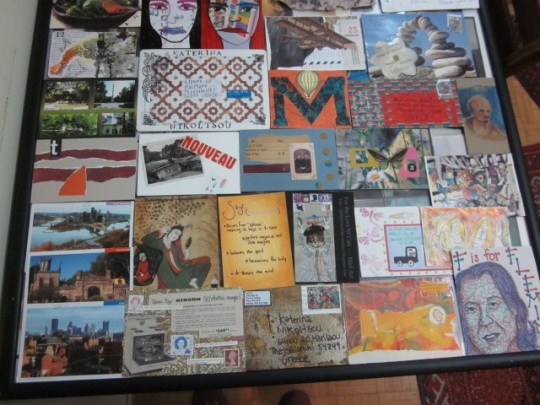 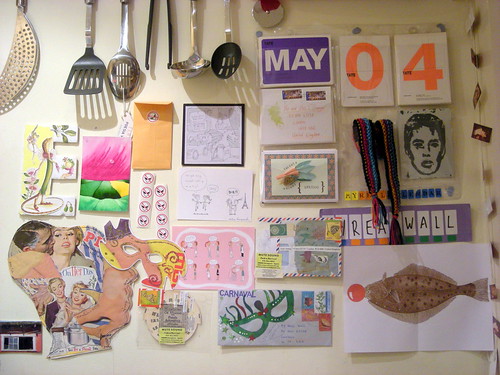 Still playing catchup with our backlog of recieved post after a month away – @Grthink you were so right!

These must have been in my REAL wall towers for at least a month, so here goes…

Top left is from JJalltheway – you’ve already seen this a few times, both here and on the sand in Phu Quoc island, Vietnam. What can I say, we like it, so it’s travelled all over, and will probably pop up all over the place. Thanks so much for the wedding gift too JJ, that was so thoughtful. Finally I can see the works of Shaun Tan for myself.

The lovely vibrant pinks and greens is a piece called “Horizon 2 January 2009” and has come from Whimsy and Colour, who is based in Calgary. Little known fact – I’m related to a politician in Calgary and will always go there when I’m in Canada.

Martha Miller makes her second appearance on the wall, with her mailart 365 head theme still going strong 60 heads in!

There are 3 Little Big Stories on the wall today, which arrived well after the deadline, so sadly didn’t make it on to the walls of Pimlico. The show has been awesome, and I spoke to the librarian about the possibility of making a book from the pieces. I am thinking of extending the call to include new artists, and artists who were gutted that they missed the deadline for the show, and I intend to make the book available for purchase with all profits going to the library book buying fund.

2 new mailartists on the wall today are the Spanish speakers Cernjul Viviana from Argentina and Mute Sound from Spain. Cernjul sent in the Carnival piece with mask. Check out Cernjul’s mailart blog for some great stuff coming out of Argentina.

Mute Sound sent 2 intriguing pieces, with circular motifs – Help Mute Sound out with his project “1 minute hypnosis” by sending 1 minute of sound in any system by mail or email. Check out his website for more details.

Thanks to Merdoc Robotics for your block print, which takes pride of place in the calendar, alongside one of Elenas new quilling contacts, Catherine.

What a day! Loads more to come!