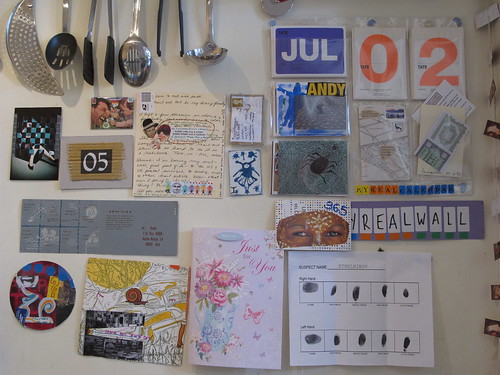 What an exciting year this is turning out to be for me and for mailart in London. I can hardly believe that this project that I started off just over 2 years ago has grown so big!

This week, Elena and I attended the opening of our THIRD mailart show in 2011, in Kingston. I’ll write more about this in my next post, but we’ve been working hard on the show and on the website at http://iyaf.schoolswaps.net/ as well as on the huge school swapping project I set up at http://schoolswaps.net/ so I’m falling behind a little on sending and posting here on my REAL wall.

That’s not to say that I’m not still hugely excited about the stuff I’ve received. Far from it, and it’s seeing stuff in my mailbox every day that fires me up to get others sending mailart.

This week we’ve seen some wonderful stuff in the REAL wall inbox, including a great big card from Elena’s best friend and some ATCs that have come in for her from Swapbot pals. Elena is going through a huge Swapbot phase at the moment, and is signed up for about 15 so if you’re on Swapbot and involved in papercrafts, watch out!

Mailart has come in from mailartists from far and wide. Some names on the wall this week are Farmageddon from Petaluma, Pierpaolo from Italy, who is a fellow 365er, Strenikov, Maygirl from Sendsomething, Mary England, Madmadge, mabb, Molly from Australia and Hope.

There are some great mailart projects in there, do click on some of the links and see them. I love Hopes project, The instant storybook at http://keepwritingpostcards.tumblr.com – it’s an 8 picture story done in collaboration with someone else on a postcard. Take a look at her site and see for yourself, as she explains it a whole lot better than me!