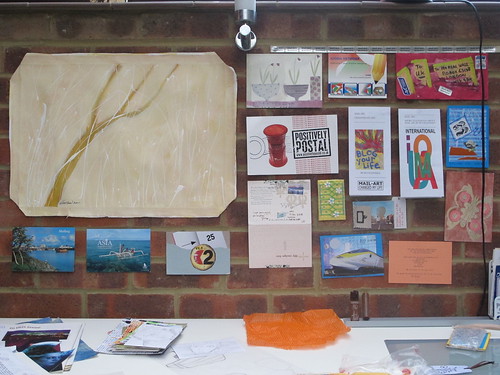 my REAL wall has been keeping a pretty low profile lately. The reason we’ve been out of action is because me and Elena have been moving house!

Now, the best address to send your posts to to get onto my REAL wall is

The new place is much more befitting of a newly married couple. It’s much bigger, has 2 rooms and a conservatory where this picture was taken where we have an art table. Yes, you read that right. We have a table dedicated to making ART!

So much has happened since the last post. Notably, we have met up with 3 mailartists and been to Turkey. We met Dewi last month, who is a mailart365 artist. He popped over from Canada via Tuscany and showed us his sketchbook. It was great!

Katerina Nikltsou, another 365 artist, came over from Greece and stayed in Notting Hill, just around the corner from our old place. We popped in to see her, and she gave us that lovely acrylic painted piece that dominates todays wall.

Mim, the other 365 artist who is on track and whose piece is on the wall below Katerinas, came over earlier on in the year, so technically that means we’ve met every artist on the 365 who is set to complete the project on December 1st. Only 26 pieces left to go for those heroes!

Another notable artist on the Mailart 365 project that I’ve met is Postively Postal, who is currently running a project in conjunction with the Royal Mail called “The A-Z of the UK”. Check out his site for details of how to pick up some exclusive stamp packs from the Royal Mail

One person who could easily be on 365, but isn’t is the great Ruud Jansen, who runs IUOMA. He came over from Holland last month on business and I very nearly met up with him, but he ended up too busy, which was a shame. However he did send some mailart through, which you can see here.

That lovely cut out butterfly is from Spopod, the index card is a classic Lindsay Killin piece and there’s a new piece from the Keep writing project by Hope, who’s work keep making me smile. This time, I’ve got a recipe for chocolate cake from her, and I need to dig up a decent recipe of my own and send it back. If you’ve not seen the Keep writing project, check it out RIGHT NOW at www.keepwritingpostcards.tumblr.com

10 thoughts on “my REAL wall – First wall in Kingston”