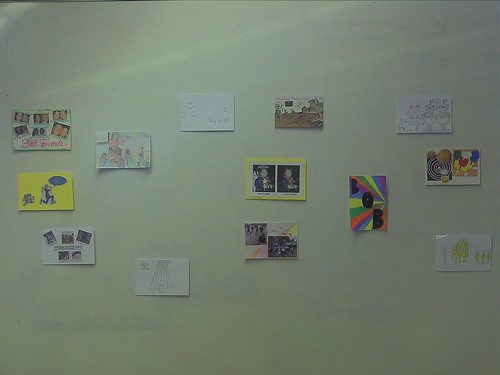 A couple of weeks ago I presented a lecture to some students at the university where I work on the use of postcards as an expressive tool for an assignment they were to be set.

The idea was that the students were going to create 5 postcards on which they were to tell of 5 incidents that stand out in their memory from their school days.

After introducing my REAL wall and talking about postcards in schools and how they had been used to tell stories from my experience, the students were asked to create their first ones and bring them in this week. This is by the first class and there are some cracking stories here!

The class was such a pleasure to attend. When the students came in, they dropped their cards into a “postbox” by the door. This mean that the students could remain anonymous if they wished. The lesson commenced and halfway through the lesson the students took a break, during which time the postcards were all put up on the board as you see them here.

On the return from their break, I took the students and we took a look at the postcards submitted. Students were asked to look at the postcards and discuss what they thought each one meant and if they related to any of them. They were told that they didn’t need to say which was theirs if they didn’t want to, but pretty soon we had explanations coming in from every student about what their postcards represented. It was GREAT! There were so many experiences, and so many nods from people who had been there.

In the flickr version of this photo (which you get to by simply clicking on the photo), I’ve done my best to recall which stories went with which, so if you hover over the images you’ll be able to read the stories. If you don’t read the stories, do just enjoy the images and ask yourself what they may mean.

At the moment the students are collecting these images up on a class blog, which is private, and at the end we hope to put on a little show, which should be a real gem. It would be really nice for teachers to be able to see the sorts of memories that the children go away from school with. I will also ask the students to upload any images they want to share with readers of my REAL wall so that they can share their experiences with you directly. You all have a treat in store believe me!

A little note for the Thursday group – I’m so sorry I didn’t manage to get a photo of the wall at the end of the lesson as I was chatting and by the time I remembered the postcards had all gone! 🙁