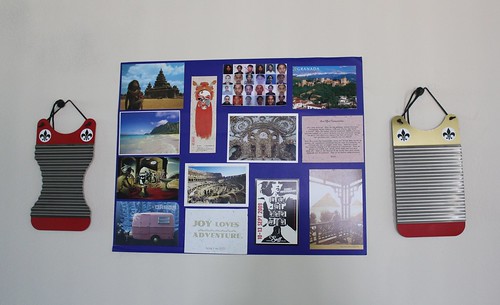 The House of Art Wall, a photo by Stimpdawg on Flickr.

This is the first House of Art Wall. I borrowed the idea from my friend Andy’s my REAL wall. He posts mailart and postcards that he receives on a wall in his house. He even told me about the adhesive board you see my postcards on. It allows you to stick paper or photos onto the sticky board without any tape. For some reason I could only find it available in England and not in the USA.

The postcards are some I’ve received and a few are ones I have collected during my travels. The postcard on the top left is a postcard that Lil Dave wrote to his dad Big Dave when we were traveling. It’s a picture of a boy holding a monkey in front of the Seashore Temple in Mahabalipuram, India. The next one over is from a Sichuan Opera that we went to in Chengdu, China. The next postcard is from Andy from my REAL wall which contains many pictures of him. The last one in that row is a postcard from a Couchsurfing Spanish couple who stayed with us – it’s from where they live in Spain.

The first postcard in the next row is a friend Raynell who I met on ICQ years ago. She sent me a postcard from her backyard in Waimānalo, Hawaii. I recently reconnected with her on Facebook after finding this postcard when I was packing up my stuff in my old room at my parent’s house. There’s a postcard of the Capuchin Crypt in Rome, Italy that we visited. It’s a creepy, but cool crypt where skeletons and bones are placed as lamps, monks and in patterns. The last postcard in that row is from Keep Writing Postcards project. It’s a homemade postcard that I receive monthly. You can receive the postcards from her Etsy shop.

There’s a few more postcards that I found along my travels. There’s a Salvador Dali postcard from Australia and The Colosseum from Rome, Italy. I like the Dream Bangkok postcard that has a pink trailer on it. This modern hotel has the best free postcards that I’ve ever seen and I’ve been to many hotels traveling around the world for 3 years. There’s also a postcard from the Sydney Underground Film Festival which has a picture of a lady with windows of men in them which reminds me of Dali. The last one is a picture of the Mena House Oberoi in Cairo, Egypt taken in 1920. Joy Loves Adventure is the second homemade postcard I received from the Keep Writing Postcards project.

The washboards are around The House of Art Wall. My fiance Ivan bought the washboard on the right for Christmas. It turned out to be the wrong color and type. The company said he could keep it and then sent the right one which is listed on the left side. Now I have to learn to play it! Ever since I saw a girl playing it in a band on the street in New Orleans, I’ve always wanted one.

I would love to receive a postcard or mailart from you. I’ll send something to you! Go here to contact me with your information.