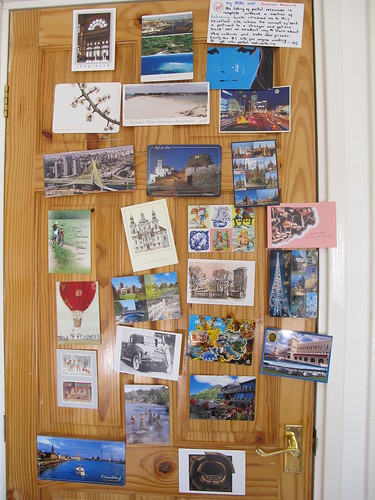 As part of the 3 year retrospective sent in to the Real show, I wanted to cover some of the resources that have made my REAL wall the place it is today and the first resource I was told about where people meet to swap post was Postcrossing

The Postcrossing project is a great starting point for anyone wanting to get into post. The setup is very intuitive, you just make an account and send post, and as a result of sending you will get one back from someone else.

In the early days, Postcrossing was how I found other people to send to, so I spent more than a year sending out Postcrossings and made some very good friends via the site who I still send to today.

My REAL wall owes a lot to Postcrossing, as the constant, reliable stream of postcards from postcrossers kept me going in the early days when I wasn’t sure that people would really be up for this postcard thing. It was good to know, from seeing how enthusiastic postcrossers are, that people were still keen to send postcards. I wasn’t just imagining it!

In October after starting my REAL wall, my project was featured on the official Postcrossing blog, which was a huge thrill and drew in even more post. I have always been able to rely on Postcrossing for a fix of postal goodness! 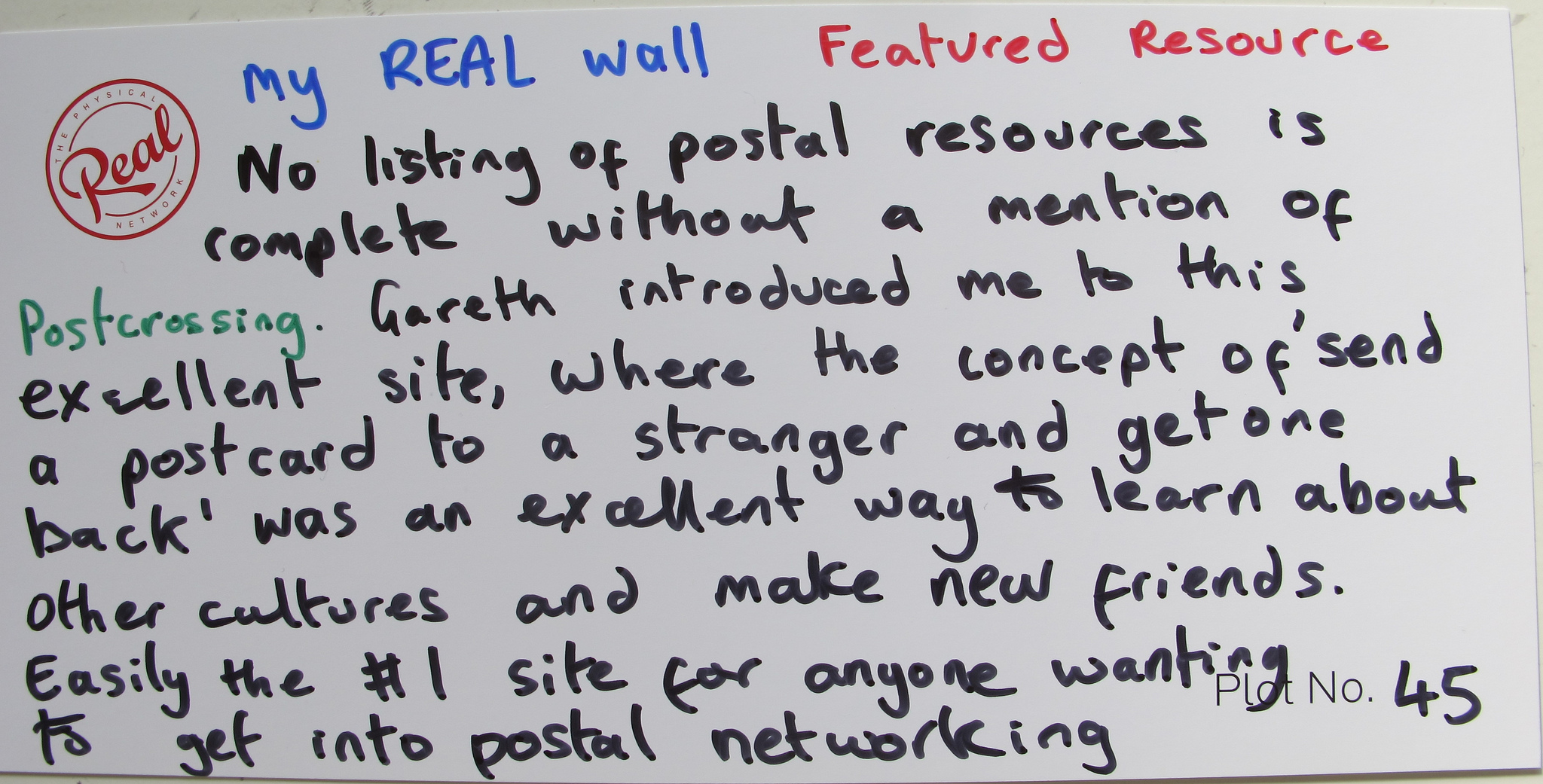 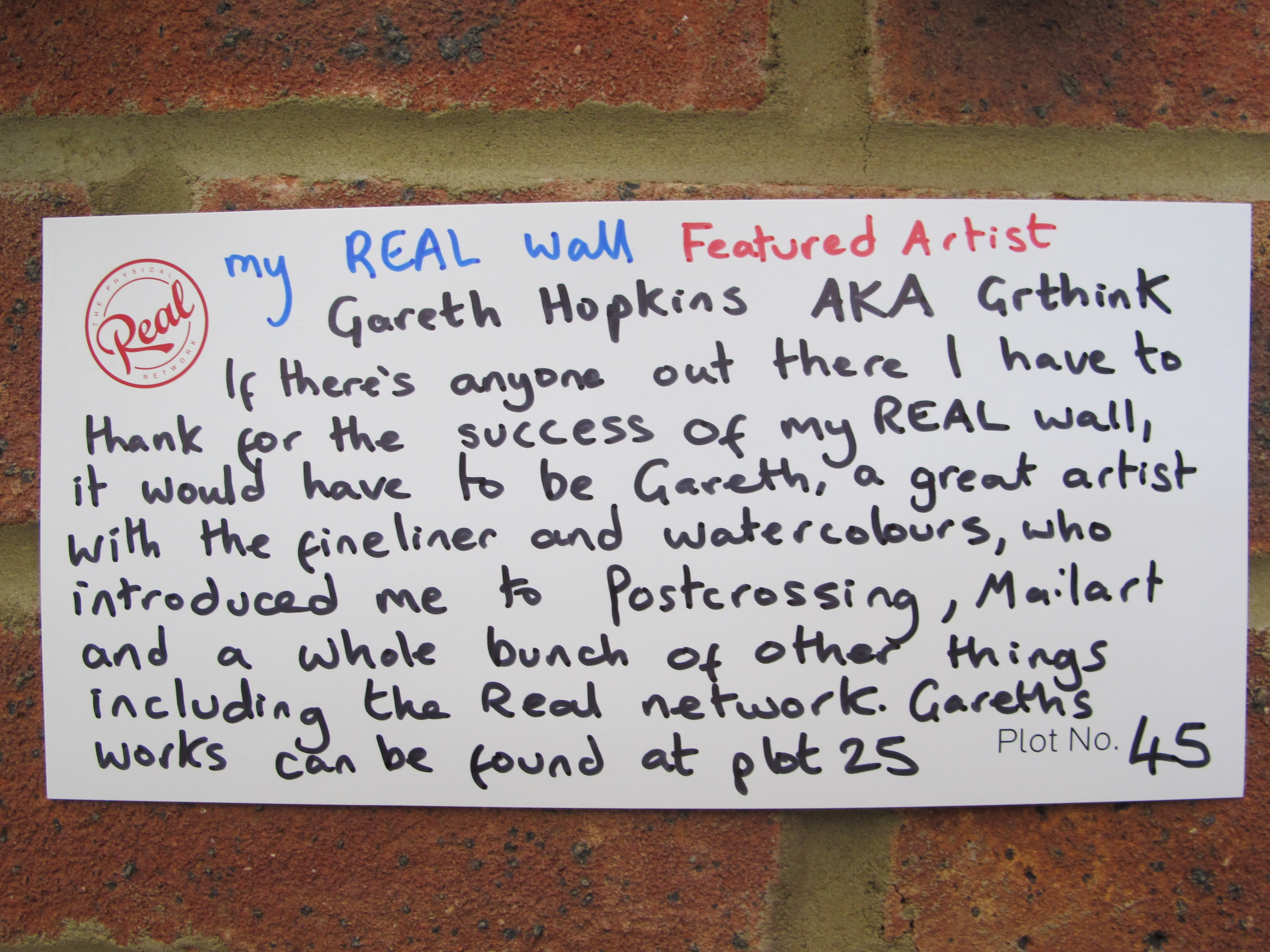 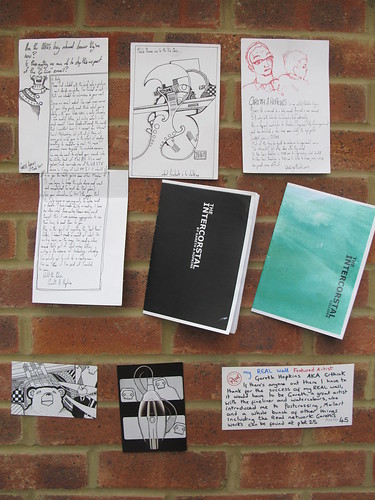 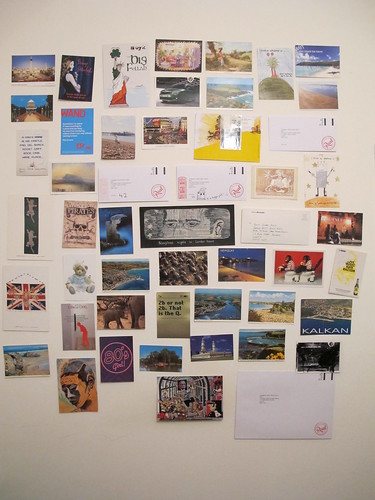 As part of the 3 year retrospective of my REAL wall, I decided to send a postcard to each of the other 50 plots (there were initially 50 plots but they added another 50).

The idea was that after opening my REAL wall, I received no post and decided that the best way to receive post was to send it. This is ultimately the first rule to live by in the world of postal media. You must send to receive, it’s only fair.

At the beginning I really didn’t know what to send and to whom to get good stuff back, so I pretty much sent to everyone. 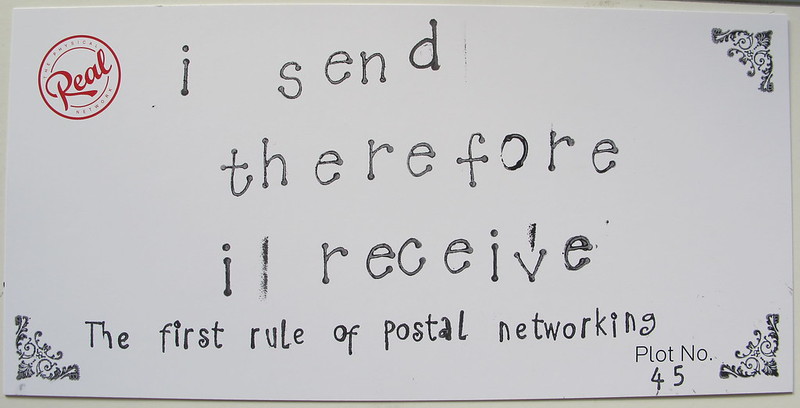 There is of course an ulterior motive to this as well.

Some of the other plots at the Real network are empty and I wanted to test to see if their owners were paying any attention, or if they’d just abandoned the plots. I know loads of awesome artists who would love to live in one of these and it kinda sickens me to see a good opportunity go to waste, so I sent a few prods out.

I’m also interested to see whether the organisers will actually put all my post into the boxes. Lots of folk who own plots seem to have taken a very controlled approach to their displays, and you can see why. Some of them are designers or companies and to be honest they haven’t done much but put a single item in, so I wanted to test to see what the limits were. Would they be delivered? Would they be taken out? It’s all part of the fun!

[Update – Real tweeted this part, despite having not put out ALL the cards in the other plots]

This week @andytgeezer sent postcards to LOTS of Real plots, check out his awesome image to see them all together flic.kr/p/cuTi2j 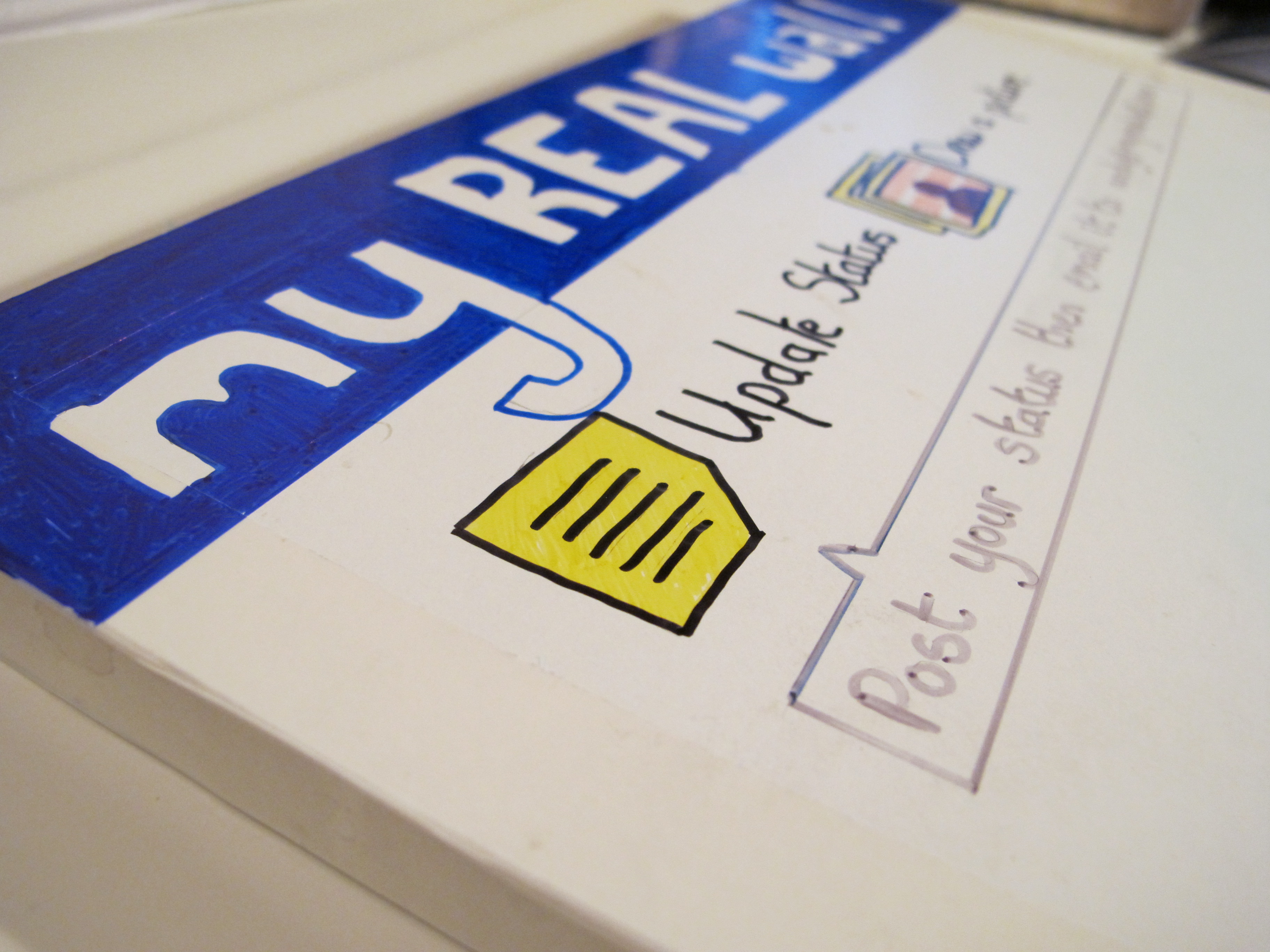 In the early days my REAL wall remained empty of pieces from other people for a long time. I knew that I could get people to send things in, as I knew that a wall with post on it would look awesome, but just wasn’t sure how to go about getting that post.

The idea here was to create a piece that conveyed the potential that I felt that my REAL wall had in the early days. I knew that the idea of sticking posts on walls was a great idea (heck it worked for Facebook!), so even though the wall wasn’t getting any post I still soldiered on. 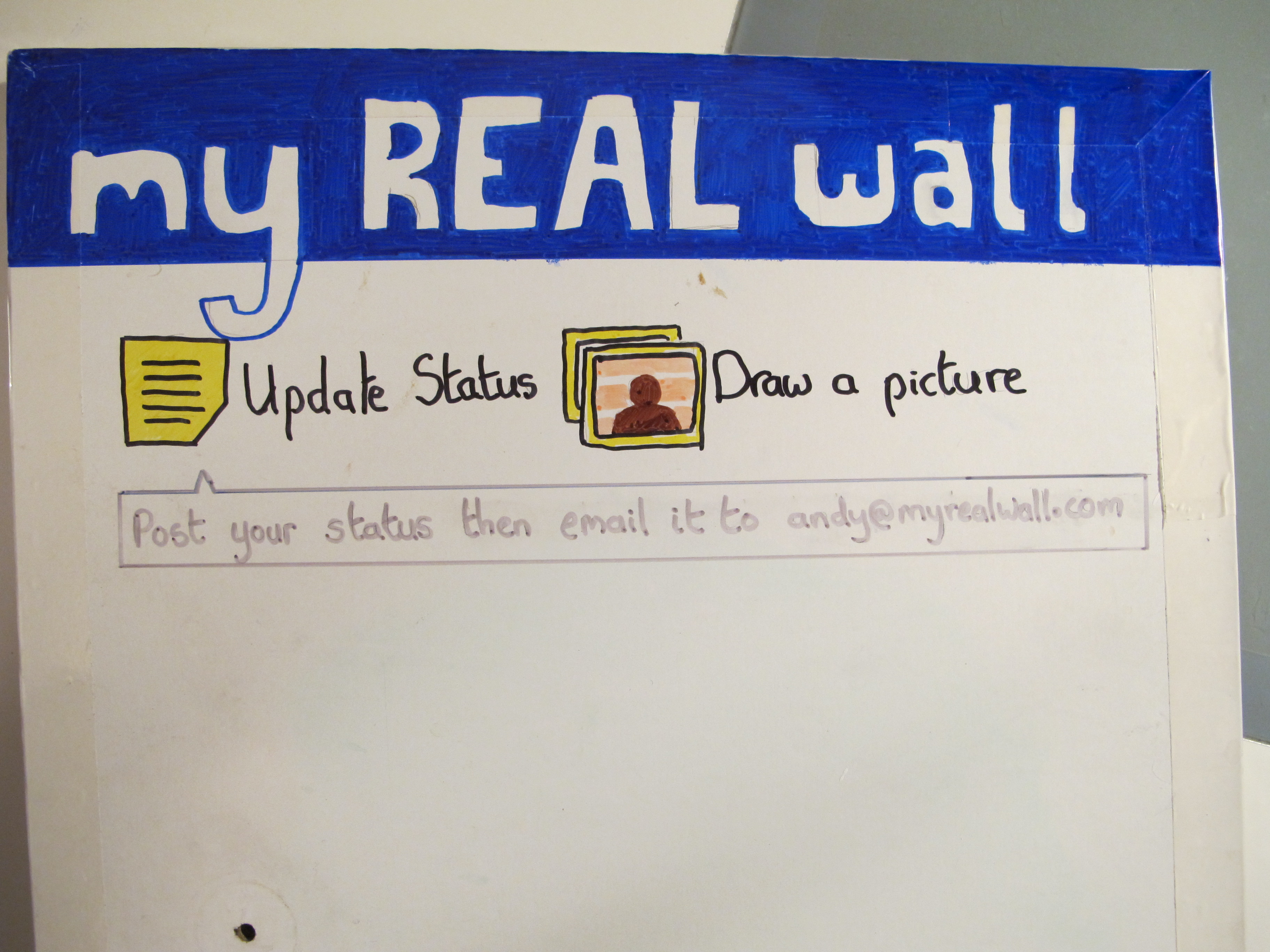 To convey the feeling, I created a blank wall by using a glossy piece of laminated wood salvaged from my next door neighbour’s garden. I sawed this so that it was a nice size to hold and cleaned it up a little, before taping the edges with parcel tape. 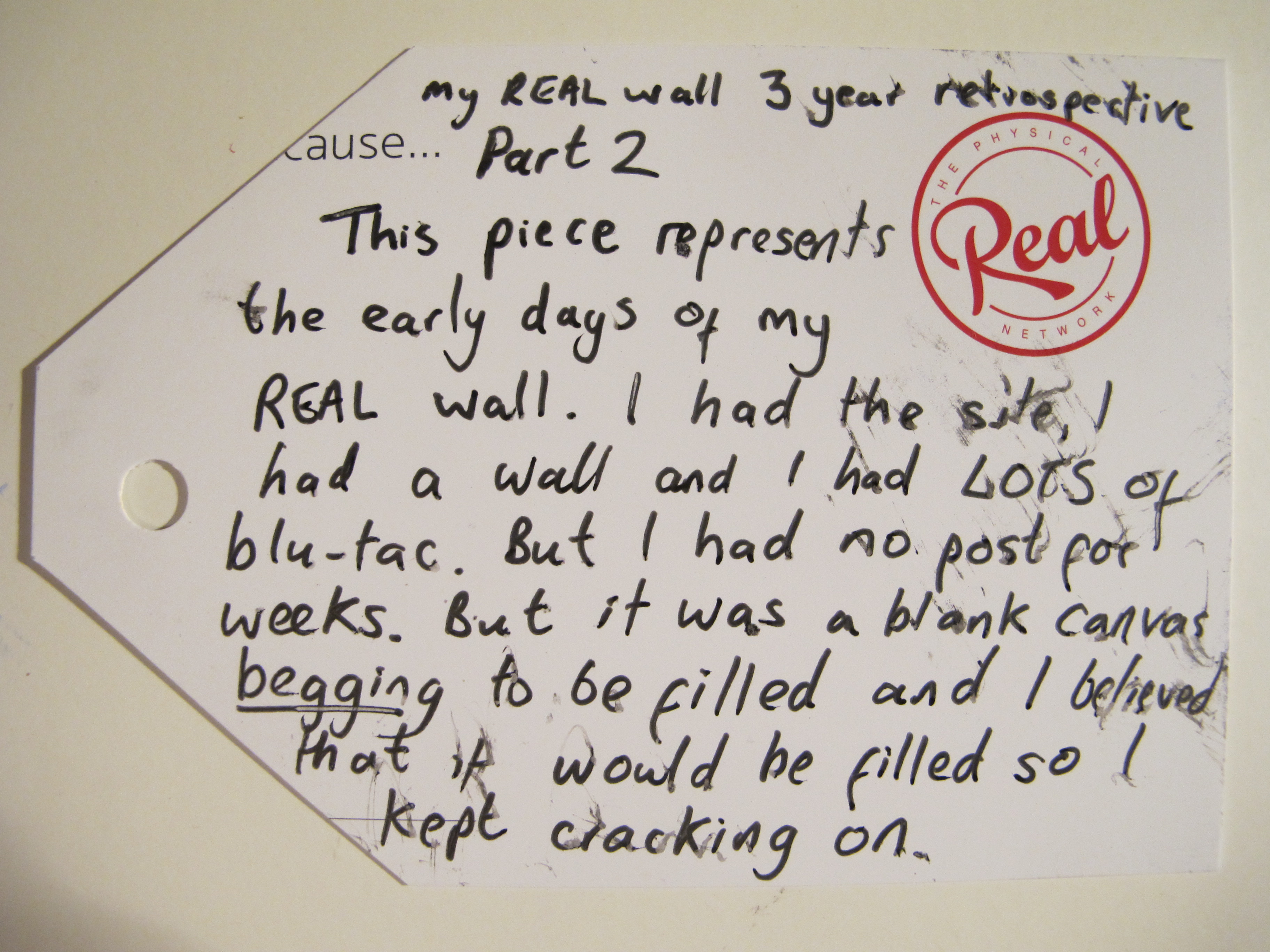 The blankness of the wall and the invitation to write on it, complete with pens is designed to simulate and stimulate that creative urge I felt and still feel to fill that blank canvas with stuff! 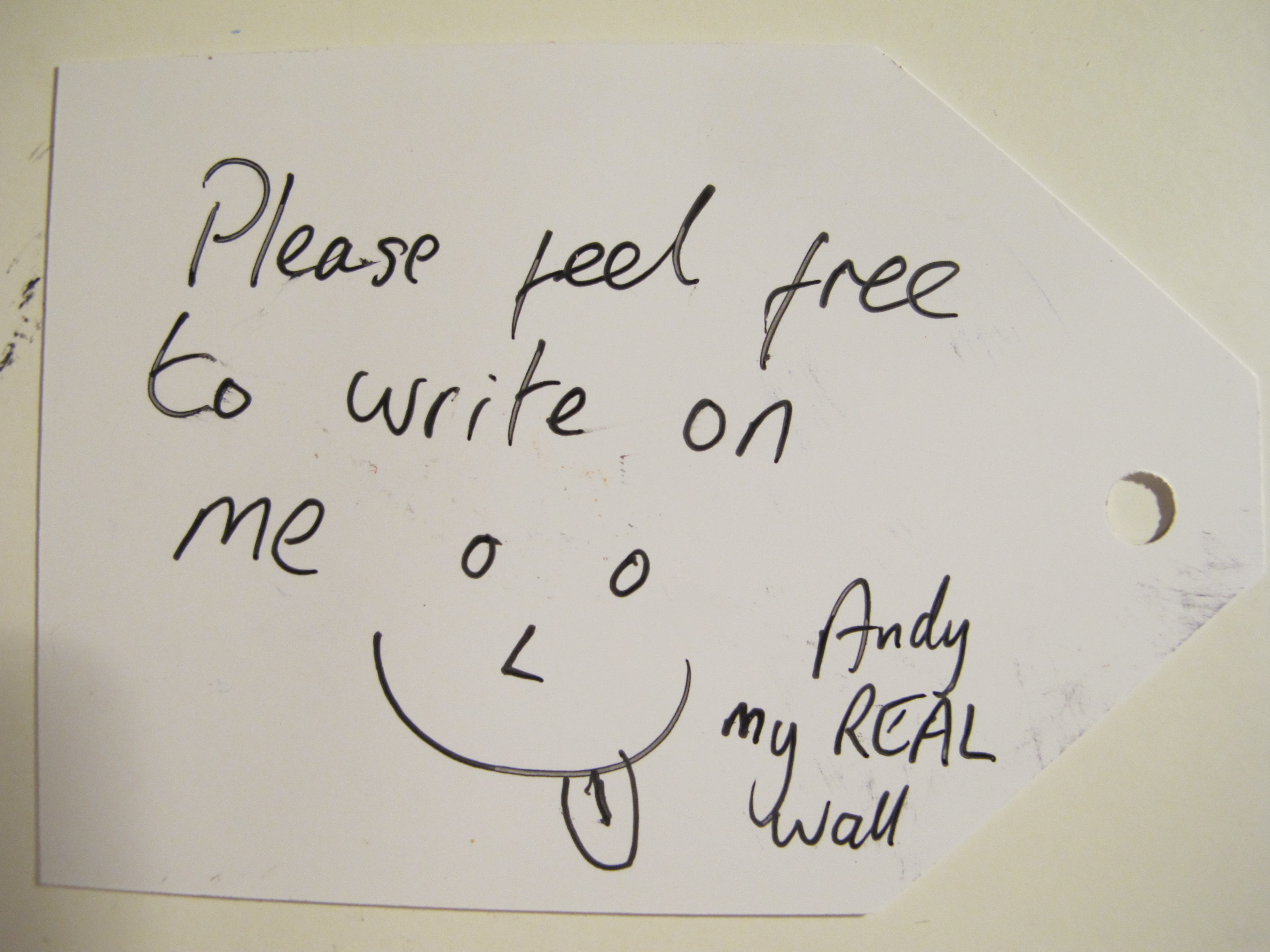 I do hope loads of people do send in their statuses, and I’ve created a page on my REAL wall to display them all when they come in.

On a related note, the REAL wall was too big to fit in an envelope, so I had to create my own, using a large bubble wrap envelope from the neighbours house again. The Real network has provided me with a number of envelopes, which have the FREEPOST address printed on them. However, I wasn’t too sure if you could just write “Freepost [code] etc etc” on any envelope and have the same effect. It should go for free right? 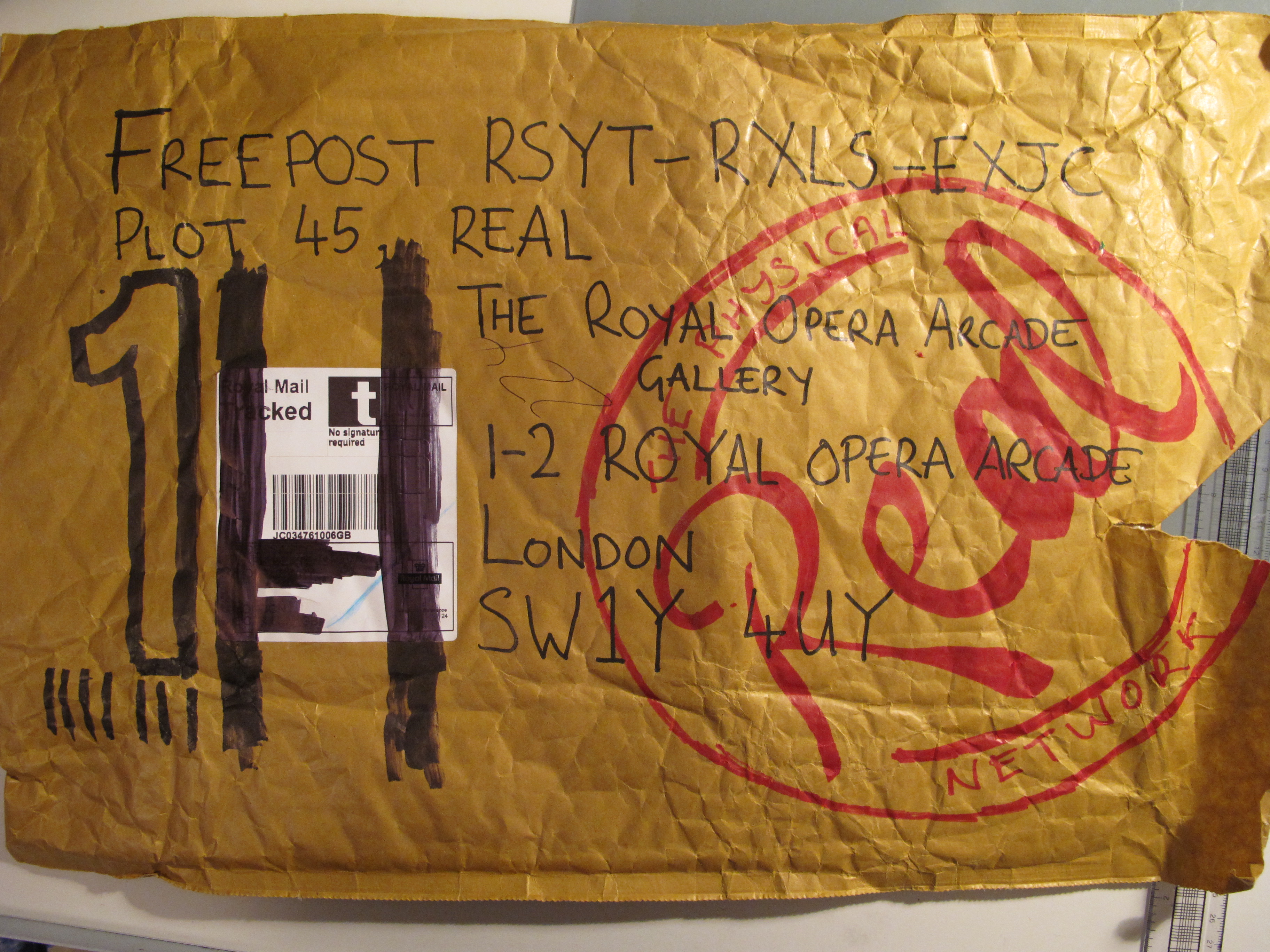 So, I went with the written version to the Post Office, with a cunningly drawn-on 1st class symbol, in the hope that my neat plan would get by the Post Office counter managers eyes. On asking, the postmaster did say that it was ok to post this large, heavy block of wood freepost without a stamp. He took the package and sent it.

As of 2 days later (when I’m writing this) the package doesn’t seem to have arrived, whereas all the stuff sent in the official envelopes have got through. We’ll see what happens and I’ll keep you posted right here on the blog

[UPDATE – The package has arrived!

Plot 045: @andytgeezer Arrived safe and sound along with some other great post. Your plot is taking over the gallery! twitter.com/WeLoveReal/sta… 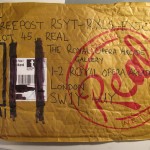 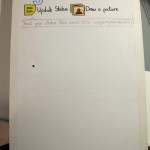 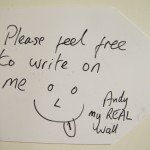 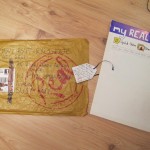 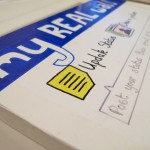 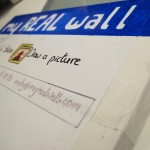 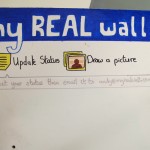 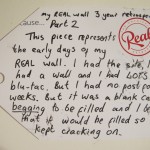 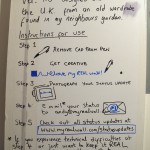 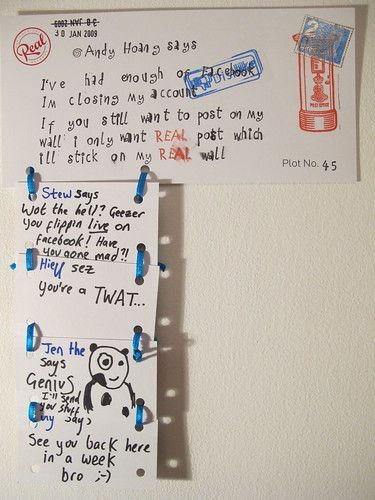 This month, my REAL wall is in residence at the Royal Opera Arcade Gallery, courtesy of the REAL network.

As a result, all post sent in to my REAL wall will go straight up on my plot there, so if you are sending in, keep an eye on Plot 45 which will be updated daily by the lovely staff at the gallery.

Meanwhile, back here at my REAL wall HQ, I will be preparing the pieces that go into my plot from me. Yes I find it odd too, sending post to myself. As far as I know, the only person who does this on a regular basis is Valentine. Personally I can’t see how this is going to work for the other plots, but for me, the idea of sending something to myself for display presents a new challenge, and I thought that I would make use of the space to create a retrospective of my REAL wall, in chronological order. I’ll send them in and post them here a few days later.

This first piece shows my decision to quit facebook and the small number of comments I received, which mainly suggested that living without facebook was not possible. 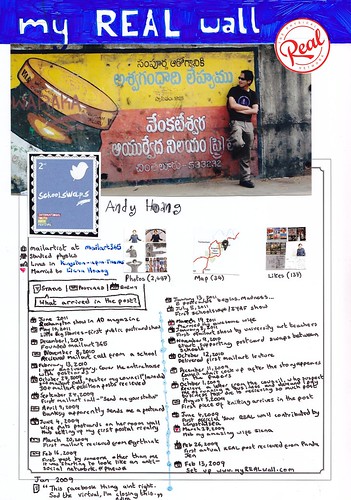 I’m currently taking part in a postal project in the centre of London called welovereal. They give me a “plot” and I need to fill it by sending post in. My first piece of post has to be a profile, for which the organisers have sent a preformatted profile page requesting a name, location and bio.

I’ve decided that my plot will be a pretty thorough history of my REAL wall, so I wanted to get off on the right foot with the profile, giving the audience not just the information requested, but a neat biographic preview of what is to come over the month.

Facebooks timeline format suited this idea and approach perfectly, but I did have to totally ignore the layout provided.

It was such a lovely trip back down memory lane to dig out these major events, and the whole thing took just over 4 hours to complete