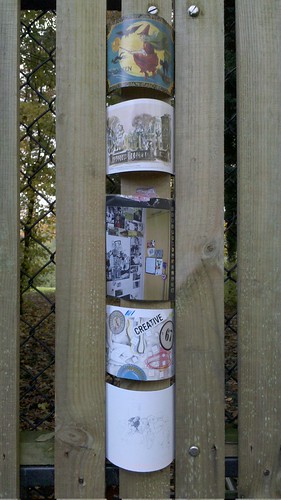 Happy Halloween from my REAL wall, originally uploaded by andytgeezer.

Me and Elena always take a few of your cards out for walks with us when we go out. This week we got a Halloween card from B, who has sent at least one a month for the last few months.

Apparently Halloween is huge over in the states, but over here, we’re still just starting to get it. I actually still don’t get it, hence today’s REAL wall is not at all scary. Halloween in the UK is still very much a costume party I feel, as it’s an import really. Personally, I’ve never known what happens if you say "trick" – do you get beaten up or something?

I never done trick or treat as a child myself. Growing up in Thamesmead in south London, knocking on someones door and asking for money was a ticket to getting your head kicked in, so I never really quite understood what the whole thing was about.

The other artists who will be having a happy halloween tonight with a glow in their bellies for appearing on my REAL wall are Mim, who has been really encouraging about my mailart lectures, Dewi, who has a few new fans as a result of the lectures and Ammy from Singapore.

Ammy has sent me a cool pic of her wardrobe and wall covered in postcards. One of them is mine, hence why it is also todays your REAL wall!

So it’s a pic of someone elses wall on my wall. I think I may just send her a pic shortly, and see how long we can keep this joke going…

Second from bottom is a postcrossing from Natasha from Belarus. That’s my first ever card from Belarus so thanks and happy Halloween to you too Natasha!